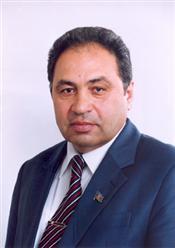 In 1966, Academic Abel Maharramov entered the faculty of chemistry of Baku State University and graduated with excellent grades in 1971. After the graduation of the University, Abel Mahammad MAHARRAMOV worked as operator and then as engineer at All-Union Scientific-Research Institute of Olefins. In 1973, he entered the Moscow State University named after M. V. Lomonosov to post-graduate stage on specialty of “Organic Chemistry”.In 1976, he defended his candidate work “New method of raise of electrophylic of sulfochlors in the reaction of double junction to links” under the direction of N. S. Zefirov.

In 1976, Abel MAHARRAMOV began its pedagogical activity. Till 1991 he worked as senior scientific worker, senior teacher, the head of Teaching Part of University. Later he became the associate professor and dean’s assistant at the University.In 1991, he defended Ph D on “New synthetic approaches on the basis of electrophyl reactions of olefinations, three organic carbon- and heterostyled compounds” and became the Professor of the department of organic-chemistry. In 1993-1999 he was the dean of “Chemistry faculty of Baku State University”.

In 1998, he became the true-member of Academy of Science of New-York. During his pedagogical activity he published more than 525 scientific articles. He also is the author of 33 inventions, 7 monographs, 31 textbooks and manuals. He is one of the authors of “Small Encyclopedia on Chemistry”. A. M. MAHARRAMOV participated in many international conferences and symposiums, and lectured in such countries as USA, Turkey, Italy, Japan, Russia, Hungary, Iran, Bulgaria and etc. In 1999, according to the decree of our national leader Heydar Aliyev he was assigned as a rector of Baku State University.

In 1999, on the basis of his achievements Abel MAHARRAMOV was considered as one of the scientists of “2000 outstanding scientists of XX century” catalogue of Cambridge International Biography Center of Britain and was declared as the “Man of year” on international scale. He is also a deputy president of this center. On the basis of decision made by “Bilik” educational activities society, in 1999, the rector of Baku State University, Professor Abel Mammadali MAHARRAMOV was awarded to “Medal named after Yusif Mammadaliyev” due to his achievements in developing of scientific and educational systems of Azerbaijan Republic.

In 2000, he was the head of Council on Defense of Candidate and Doctoral Candidacy, under Baku State University established by Supreme Attestation Committee of Azerbaijan Republic. On February 11, 2000, on the basis of decision made by our national leader Heydar Aliyev Abel Mahammad MAHARRAMOV was awarded the name of Honored Scientist. On June 10, 2000 he was awarded the Gold Medal conducted at Tehran, for his productive labor in the sphere of science and technology. In 2001, he was elected as Associate member of NASA.

Under the direction of Abel MAHARRAMOV there were brought up more than ten candidates for science. In 2002-2004 he was the president of Association of Universities of Black Sea Basin States and in 2004 he was awarded the order of Supreme Degree Commodore of Romanian Republic. In 2005, he was also elected the “World leading man of education” at International Biography Center, for his initiative work in the sphere of education, for his contribution to development of national education and to integration processes at international education arena.

On November 2006, Abel Mahammad MAHARRAMOV was elected the deputy to National Assembly of Azerbaijan Republic. The scientific-pedagogical activity of Abel MAHARRAMOV was honorably appraised by appropriate decrees and orders of Ministry of Education and University Administration. One of achievements of Abel MAHARRAMOV in the sphere of scientific-research was the determination of new synthetic direction of electrophilic compound (AdE), became known as “doping-compound” in the sphere of delicate organic synthesis.

That is him defined that by using the powerful electrolytes and appropriate polar solvents, the direction of reactions (AdE) can be keenly changed. As a result, he proved that the synthesis of some member class matters, production of which was impossible from the practical point of view, could be realized in this form. Abel MAHARRAMOV, widen his research work in this direction and have great results instead of using of elephils in (AdE)-reactions, he used such matters as anti-hydride sulfate and three-valence iodine compounds. On the basis of scientific-research work conducted during the past years, Abel MAHARRAMOV determined that different replaceable tirans and oxen’s turn to ditiirans and dioxins on one certain stage in “doping atmosphere”.

This scientific achievement has not only the theoretical but also the practical use. (broad utilization of some ditians produced from lubricating oil). A. MAHARRAMOV was the first who investigated the conformation analysis of 12-organic zinc. With this purpose, he theoretically settled quantum-mechanic account on the basis of Kremer-Popla parameters; next, he studied the molecular structure of 12 organic zincs, by synthesis of their sated and non sated products by roentgen structural analysis.These achievements were published in several foreign magazines (Tetrahedron, Sulfur Lett, Synth, Comunn, JOrX, XQS, Izv. AN SSSR and etc.).

His achievements also raised interest of many foreign scientists, and as a result he was sent with academic journey to University Minnesota of USA, in order to conduct joint scientific research for solving some problems. This progressive collaboration with American scientists continues up to day. His scientific activity has close contacts with scientists from USA, Turkey, Russia and other countries. Professor Abel MAHARRAMOV, has a big role in reformation processes of educational system of Azerbaijan, shows raise the educational quality of University, closely participate in transforming of educational system to two stages of education (bachelor and master), and made great contribution to formatting of educational plans on chemistry specialty. Abel MAHARRAMOV can win the authority in all collectives he worked with, because of his initiative, creativity and care. His diligence and creativity awarded as worthy service for increasing of education quality and for reformation of educational and scientific spheres.