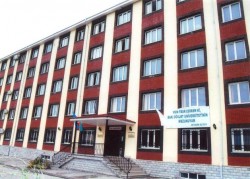 The great leader Haydar Aliyev evaluated highly accesses of education in comprehensive, harmonious development of youth, demonstrated special care to the education that is basic nation of independent state. President Ilham Aliyev who continues political course of Haydar Aliyev with dignity, pays special attention to the education in forming of citizenship position in youth, detecting special talented youth as well. It is not coincidence that on 17 April 2006, by the president of Azerbaijan Republic Ilham Aliyev’s disposal “Special talented students’ (youth’s) State Program (2006-2010) in accordance with development of creation potential” was admitted. In accordance with this program prominent chemist scholar, member of parliament, rector of Baku State University, academic Abel Maharramov’s initiative and effort, as well as agreement of Ministry if Education starting from 2007 “Young Talents” lyceum operates attached to BSU. The lyceum was created according to Ministry of Education, Professor Misir Mardanov’s №708 command on 08.06.2007 and rector, academic Abel Maharramov’s R-58 command on 17.08.2007. The main duty of lyceum is to detect young talents that would serve to national purposes, to create comprehensive condition on their development, to grow youth that have deep knowledge as well as high moral qualities. The lyceum uses sample teaching programs of secondary schools in its operation, besides that it also guides advices of scientific council of BSU, last achievements of modern pedagogy about education and nurture. The lyceum founder is Baku State University; lyceum is subordinated to BSU. Lyceum has formed during 5 years, thus, it has staff and material-technical base that is required now.