Elchin Babayev, Rector of Baku State University (BSU), and Amir Aliyev, Dean of the Faculty of Law Amir Aliyev took part in an extended online meeting of the rector of the Kazakh National University named after Al-Farabi in Kazakhstan.

Galimkair Mutanov, Rector of Al-Farabi Gazakh National University, started the event with a speech about staff training with BSU and dual degree program between the universities. Rector Mutanov stated that Azerbaijan and Kazakhstan are among the countries with access to sea and energy standing strong among the countries both in Caspian Region and internationally developed. For this reason, the training and activities of personnel in the legal sphere will give very positive results. He stressed that both of the countries have strong scientific background in this sphere.

Elchin Babayev, Rector of BSU, noted that the initiated program would be the first dual degree program between friendly and brotherly countries of Azerbaijan and Kazakhstan. The agreement signed by Baku State University and Al-Farabi Gazakh National University, the first and leading educational institutions of both countries, has been well accepted by both stakeholders. E.Babayev noted that the scientific conditions in the field of "Maritime and Energy Law" have been formed at the Law Faculty of BSU, and this training has been successfully conducted in English for six years. He highlighted the holding of international conferences, emphasizing the establishment of a teaching and scientific base on "Maritime and Energy Law" and the formation of a large-scale teaching staff at Tulane University in the United States. E.Babayev mentioned about the importance of support provided by Tuleyn University in the establishment of "Maritime and Energy Law" Center at the Faculty of Law.

At the end of the meeting, an agreement was signed between BSU and Al-Farabi Gazakh National University in the field of staff training in the dual master degree program "Maritime and Energy Law" at the Faculty of Law.

The meeting was also attended by Daulet Baydeldinov, the Dean of the Faculty of Law of Al-Farabi Kazakh National University and accredited Ambassadors of both countries. 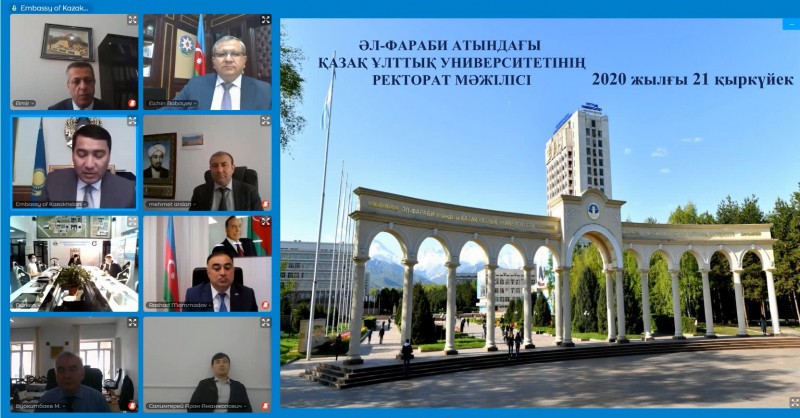