A virtual Republican Scientific Conference entitled “The genius of Heydar Aliyev and the sustainable development of the revival period” was held at Baku State University (BSU), dedicated to the 97th birth anniversary of Azerbaijan’s national leader Heydar Aliyev. The conference, organized by the Department of History  was attended by  100  participants, deputies, professors and teachers of BSU, students and doctoral students.

Speaking at the conference BSU rector Elchin Babayev said that the achievements in Azerbaijan during the years of independence were connected with the name of national leader Heydar Aliyev. Emphasizing Heydar Aliyev’s role as a guarantor of the national spiritual values Rector Elchin Babayev  noted his outstanding contribution to the development of culture, science and education.

Director of the Institute of Caucasus Studies of ANAS, Corresponding Member of ANAS, Professor Musa Qasimli,  Javid Osmanov, BSU professors Zhale Aliyeva, Kamila Aliyeva and Anar Iskenderov,  the Chairman of the Youth Union of the New Azerbaijan Party Seymur Orujov, Professors of the History Department of  BSU Ibrahim Zeynalov, Irada Huseynova and other officials made presentations about the role of great leader Heydar Aliyev.

A short film, about the life of the National Leader Heydar Aliyev was shown at the end of the conference. 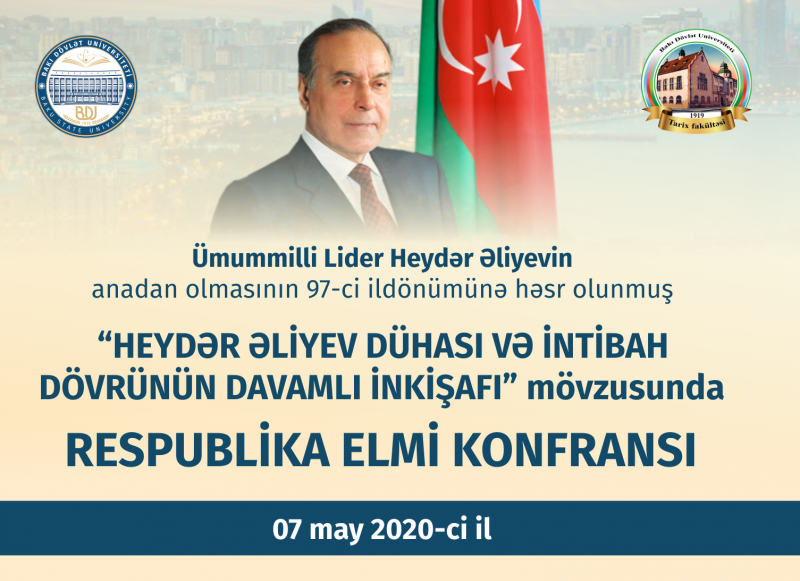 “Publons” was founded in 2012 to address the static state of peer-reviewing practices in scholarly communication, with a view to encourage collaboration and speed up scientific development
20/05/2020
more

BSU nominated a scientific work of Vasif Babazade, the Head of the Department of Mineral Resources, Faculty of Geology, Supervisor of scientific- research laboratory of Aerospace research of Earth resources, Doctor of geological-mineralogical sciences, professor, correspondent-member of ANAS and Shahla Abdullayeva, Associate Professor of BSU for the State Prize in 2020
11/05/2020
more
archive